Milk is an essential part of our lives. Straight from childhood to adulthood, milk and milk products have played a pivotal role in human nutrition. Usually cow or buffalo milk is used as an alternative to other food stuffs which is usually because milk is a complete food in itself. Since India is an agro-based country primarily, majority of it’s economic growth is inevitably dependent upon agriculture and it’s allied fields such as livestock and dairy farming. Dairy farming has a stronghold in Indian agro-sector and plays an important role, infact apart from economic reasons, cattle rearing has a significant standing in cultural sector as well. As of 2020, despite the pandemic, dairy sector has continued to boom and increase our nations’ GDP [Gross Domestic Product] with around 4.2% of total GDP percentage being contributed by our Dairy Sector. Also, it is interesting to note that this sector particularly continues to grow annually at the rate of 4.9% which is a really good indicator of economic growth and boom. According to latest research conducted the total value of dairy sector of India, the dairy market in India reached a value of 11,357 Billion in the year 2020. There is no turning back and only upward walk for this sector! In today’s blog let us uncover some of the facts about milk and milk yield and factors affecting this.

THE MILK FACTOR: SOME INTERESTING FACTS ABOUT MILK.

Milk is defined as a lacteal secretion apart from colostrum obtained via the process of milking healthy cattle. Milk is usually obtained from mammals and is characteristics of this group of animals which includes humans as well. Milk is generally nutritious as it provides nutrition to the young ones since young ones of any animal species are incapable of fending for themselves.

Milk yield is defined as amount of milk obtained annually per cow per year and is usually a good indicator of the milking capacity of that cattle. Milk yield is usually dependent upon many factors some of which are:

It is said that foreign breed cows yield higher amount of milk as compared to indigenous breeds but this thought has been challenged in recent times as the Indigenous cow breed Gir has demonstrated higher milk yield as compared to its foreign counterparts. Yes, breed does play an important role in the milk yield %.

Any decrease or abrupt changes in the daily food-water intake has hinted towards negative deviation of milk yield as milk yield is dependent upon the food-water intake. It is important to note that the average milk yield is related to not only the quantitative basis of food intake but also upon the qualitative factors of food intake. Quality of food has an upper hand as compared to quantity of food. High quality fodder has proven to increase milk yield. Under-feeding cattle causes drop in lactose % and may reduce the nutritional value of milk as well.

Now, despite the breed differences, there is an individuality factor which means that no two cow/buffalo would be at the same level of milking and milk yield at the same time throughout the milking season. Yes, they may have similar milk yield but no two fingers are the same, and this applies to milk yield of two cattle as well! Even if they belong to the same breed this is all due to genetic variations and genes.

Milk production increases as the lactation progresses and reaches its peak level mid-lactation and then subsequently falls towards end of lactation. Pregnancy too has an inhibitory effect on yield, also, frequency of milking, interval of milking and completeness of milking, all plays a pivotal role in milk yield and its fluctuation.

If there are any underlying concurrent diseases affecting the cattle it will inevitably affect the milk yield. Disease conditions such as ketosis, metritis, mastitis, milk fever, hypocalcaemia, retained placenta etc decreases the milk yield and has an overall negative impact on the overall health of cow.

Milk is produced by the mammary glands of mammals as mentioned before, but it has a complex mechanism behind it. There are certain chemicals in our bodies termed as hormones which balance almost all the events occurring inside the body. They also play an important role in regulating various processes and cycles which helps to keep an individual healthy and well-balanced. It is interesting to note that these hormones are connected to external factors, and it can be stated firmly that internal and external factors are co-dependent entities and are not separated from each other. External and internal factors governing the milk yield and associated factors are the two faces of the same coin! Here are some interesting facts about hormones –

This is the primary hormone which is essential for milk production. Every time milk is removed, this hormone gets stimulated to produce more milk. It acts almost as a balancer which responds to milk removed on one hand and stimulates the production of milk on the other.

This hormone is essential to maintain lactation as it increases the synthesis of lactose, protein, fats in mammary glands.

Thyroid hormones stimulate oxygen consumption, protein synthesis and milk yield and are essential for maximal and optimal production of milk.

Thus, the milk yield is dependent upon the external environmental factors as well as internal hormonal and genetic interplay. To increase milk yield, there are many novel approaches as we target the natural system and stimulate the milk production. 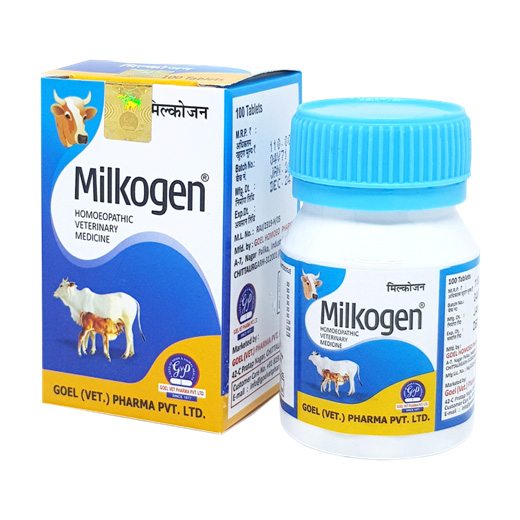 Hormone injections or therapies are adopted to keep in check the balance and cyclicity of the patient. It is not generally advised as hormones are very crucial aspect of body and are extremely essential for various life processes. A slight change or imbalance in their concentrations may backfire negatively. It’s important to note that hormonal therapy must be initiated or stopped or regulated under the guidance of a veterinary doctor only as these hormones affects the reproductive health as well as various body systems and thus affecting milking, milk yield and overall health of the cow/buffalo.

MILKOGEN is an excellent Homeopathic Veterinary Medicine used in Cows and Buffaloes for increasing milk yield naturally. It is a natural replacer of oxytocin hormone without any contraindications or side effects but with a definite increase in the milk yield. It increases the milk quantity and fat percentage of the milk to the full potential of an animal.