This unique formulation was brought up by the leading Homeopathic Veterinary Medicine producing company Goel Vet Pharma Pvt Ltd. The company is certified under WHO GMP practices which highlight its hygienic manufacturing facilities. It gained the trust of thousands of doctors and farmers who are prescribing this medicine with excellent measurable results on the milk yield of an animal.

In relieving pre-partum and post-partum prolapse of the uterus in cows & buffaloes.

Prolapse of the uterus can occur in any species but is most commonly seen in cattle (dairy and beef) and ewes (sheep). It is predominant to occur after calving when the cervix is open and the uterus lacks tone. In cows, complete uterine prolapse is common where even the horns are visibly out. Uterine prolapse is common during two separate occasions. One, immediately after calving and the other, a week later after calving (commonly hours later). It is usually seen in dairy cattle which goes in line with hypocalcemia. When the prolapse of the uterus is not related to calving, it is highly dangerous. It is most likely that during parturition, the uterus everts a little which increases the possibility of prolapse but takes place only after the calf is born. In such cases, it is more likely to damage and prone to uterine infections.

Homeopathic remedies work on the principle of “similia similibus curanter” which means “like cures like”, so is PROLAPSEGO. Hence, such formulations that cause symptoms like a diseased animal in a healthy one are used to prepare this wonder drug formula to be able to prolapse of uterus due to varied reasons. It is a formulation that is developed by a renowned Indian veterinarian after consulting many homeopaths and conducting advanced field trails over the years.

Quality, efficacy, and safety are the utmost priorities of MILKOGEN formulation. Cost-effective health care with no contraindications or side effects are the added benefits of using a homeopathic remedy. Facts about the homeopathic medicines used in this formulation :

It is best indicated in cases of acrid brown leucorrhoea, smarting in labia, poor libido, congestion of uterus, prolapse, and disturbed anteversion of uterus. Symptoms of sub-involution, pruritus, pudenda, pain in the ovaries, and down the thighs, bearing-down sensation, irregular estrus cycles with offensive, dark discharges from the genitals can be treated with this drug.

Prolapse resulting due to increasing calf weight or straining during pregnancy, or after parturition can be treated with this. Hemorrhoids, pain in the uterus and right ovary, with shifting noises along the ascending colon, irregular estrus, with pelvic tenesmus are improved to normal with the use of this medicine.

Increasing sensitivity at the genital region, dry and hot vagina, pain in the sacrum, profuse bright red discharge during estrus, hemorrhages, cutting pain from hip to hip, very offensive lochia, recurring and subsiding labor pains, and other related symptoms can be treated with this drug.

Bearing down sensation in the pelvic region, heavy uterus, recumbent, labor-like pain in the loin that extends down the legs, climacteric hemorrhage, too early and too profuse estrus cycle.

Protrusion, prolapse, or enlargement of the uterus with pelvic tenesmus and sharp pains, extending towards the udder that aggravates while lying down, pulsations in the neck of the womb, increased libido are treated with this medicine. Pain in the right side of the womb extending to the right or left breast, painful uterus, dysmenorrhoea, chronic endometritis with displacement, and other related symptoms can be improved with this. Other symptoms like green or bloody leucorrhoea that alternate with mental symptoms and pain in the sacrum can be relieved with this drug.

Dosage: Spray 20-25 ml PROLAPSIGO on the uterus twice daily or as directed by the Doctor.

Method 1: Mix some jaggery and 5 ml medicine in the drinking water and let the animal drink the mixture directly.

Method 2: Spread 5 ml medicine on a piece of roti or bread and offer it to the animal to eat, so that medicine is consumed along with food.

Method 3: Fill an empty 5 mL syringe (needless) with the medicine and distilled water and directly spray on the tongue of the animal or into the nostrils gently. Confirm that the medicine is licked by the pet.

Note: Do not drench the medicine, let the animal lick the medicine with the tongue while eating or drinking.

Be the first to review “PROLAPSGO for CATTLE -100ml” Cancel reply 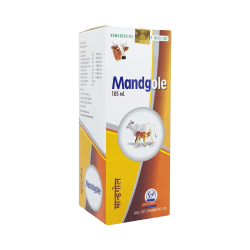 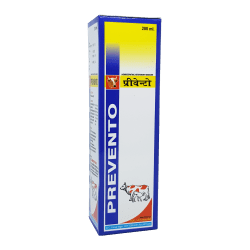